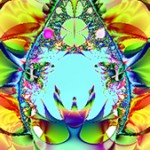 The patterns of life exhibited by large populations have been described and modeled both as a basic science exercise and for a range of applied goals such as reducing automotive congestion, improving disaster response, and even predicting the location of individuals. However, these studies have had limited access to conversation content, rendering changes in expression as a function of movement invisible. In addition, they typically use the communication between a mobile phone and its nearest antenna tower to infer position, limiting the spatial resolution of the data to the geographical region serviced by each cellphone tower. We use a collection of 37 million geolocated tweets to characterize the movement patterns of 180,000 individuals, taking advantage of several orders of magnitude of increased spatial accuracy relative to previous work. Employing the recently developed sentiment analysis instrument known as the hedonometer, we characterize changes in word usage as a function of movement, and find that expressed happiness increases logarithmically with distance from an individual’s average location.

“I hate exercising around other people…and once I get toned up and really fit, then I’ll go and show off my body…it’s like how…