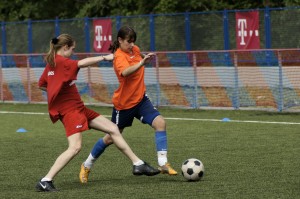 Children in afterschool programs who have a sense of connectedness with their peers are less likely to report emotional problems, according to Penn State researchers. Children exhibited fewer behavior problems if they perceived their peers were willing to encourage them to behave well.

“Encouraging your friends to do something positive or to not misbehave may start from selfishness because you want your group to earn a certain activity or privilege, but it turns into working together as a team,” said Emilie Phillips Smith, professor of human development and family studies.

She and colleagues observed the relationships children in afterschool programs had with each other and with staff. The researchers also conducted surveys to determine the frequency of problem behavior in the children. Problem behavior included smoking cigarettes, damaging property, drinking alcohol, shoplifting and smoking marijuana.

Thirteen percent of the children in this study reported purposely breaking and damaging property that belongs to someone else. This was the most frequently reported problem behavior.

Girls were more likely to feel connected to their peers and to intervene if something was wrong. They also reported fewer incidents of problem behavior.

The younger elementary-age children in the study were more likely to act out than the older children, and were less likely to report feeling connected to their peers.

“Yet, it is exciting to note the differences we didn’t see — particularly that we found no racial or ethnic differences,” said Smith. Researchers refer to the social cohesion of a particular group combined with willingness to intervene for the common good of the group as collective efficacy, and among adults it has been linked to reduced violence as well as less deviant and delinquent behavior in neighborhoods. Smith noted that much more attention has been given to these concepts among adults, and that collective efficacy in youth has rarely been studied.

“Too often, we don’t create a place where youth can grow, develop and have a hand in shaping their own environments,” said Smith.

The researchers measured collective efficacy by focusing on children participating in afterschool programs in three different areas of south central Pennsylvania. Children in grades two through five answered survey questions about how connected they felt to the other children in the program, their willingness to get involved if another child was misbehaving and the types of problem behaviors they had participated in and how often.

“We worked with three very different school districts and we didn’t find significant differences in these relationships across these three locales, though they differed substantially in racial-ethnic composition and socio-economic status,” said Smith. “This shows us that afterschool programs are an excellent opportunity to help prevent problem behavior while children are young. We are working with afterschool programs to include practices that support engagement and involvement, thereby fostering positive youth development.”

Other members of the research team were D. Wayne Osgood, professor of crime, law and justice and sociology; Linda Caldwell, Distinguished Professor of Recreation, Parks and Tourism Management; Kathryn Hynes, formerly assistant professor of human development and family studies; and Daniel F. Perkins, professor of human development and family studies in the Department of Agricultural Economics, Sociology and Education. The William T. Grant Foundation, the Wallace Foundation and the National Institute for Drug Abuse supported this research.

From Good Intentions To Healthy Behaviour by Dr Helen Street

A few weeks ago I found myself watching an advert for Nespresso coffee. The advert drew my attention, not to the wonders of…