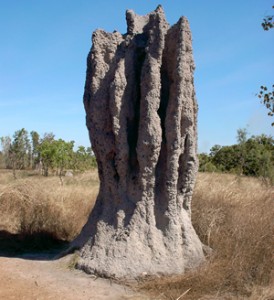 GAINESVILLE, Fla. — For some 50 years, scientists have tried — but failed — to find a way to use microbes as a means of biological control for destructive subterranean termites.

University of Florida researchers have now discovered why termites have proven to be so disease resistant. Termites use their own feces as nest-building material. The fecal nest promotes the growth of beneficial bacteria, which in turn suppress pathogens — or in plainer words: termite poop works as a natural antibiotic.

Besides improving termite control, the findings could help pave the way for new human antibiotics.

The study, published Wednesday in Proceedings of the Royal Society B, began about nine years ago, when postdoctoral associate Thomas Chouvenc, at the time a student, approached his faculty adviser, Nan-Yao Su, with his wish to study termite-pathogens interactions.

Su said he knew from the reams of scientific literature that biological control attempts in termites hadn’t been successful.

“Instead of saying ‘let’s use fungi to control termites,’ I said, ‘Maybe we could turn the tables around and ask ‘Why has it never worked?’” Su recalled.

Su, the inventor of well-known termite baiting system Sentricon, and Chouvenc are part of UF’s Institute of Food and Agricultural Sciences. Both are based at the UF/IFAS Fort Lauderdale Research and Education Center.

Termites are a $40 billion problem worldwide, and the Formosan subterranean termite accounts for a large portion of the problem.

The research team began to identify and isolate more than 500 strains of bacteria from five termite colonies collected from outdoor sites around Broward County. About 70 percent of the bacteria were shown to be active against a range of bacteria, yeast and fungi.

Researchers then honed in on a specific strain of bacteria called Streptomyces found in the nest material of all five termite colonies.

Chouvenc said it was a time-consuming process but well worth the effort.

“We had to put all of the pieces of the puzzle together and show it was not just an artificial environment that produced this, that it does this in the individual termite nest, as well,” he said.

It is possible the team’s findings may help lead to new microbes that can be used to create new antibiotics for human use, Chouvenc said. Beyond that, he said, they want to tackle questions about how termites evolved to maintain their nests’ health, and whether it’s a stable system or one that’s constantly in flux.

If the termites are able to continually recruit the microbial strains they need to stay disease free, Su said, “then we have to find out how the termites do that.”

The research was funded by royalties Su receives, as well as seed money from UF/IFAS research. The other authors were Caroline Efstathion, a graduate student and employee in Su’s laboratory; and Monica Elliott, a UF/IFAS plant pathology professor also based at the Fort Lauderdale REC.